Quick, what were your two favorite things about Joss Whedon’s The Avengers? Mark Ruffalo as Bruce Banner (the Hulk) and the subsequent banter between Ruffalo and Robert Downey Jr.‘s Tony Stark, right? For me, watching Banner and Stark use their brilliant intellects to brainstorm and work out Loki’s insidious plot was a highlight of the film and something I wanted to see more of in subsequent Marvel films.

Instead of Malibu, Iron Man 3 should have picked up in Manhattan at Stark Tower, referred to as Avengers Tower now thanks to the single A on the side of the building. Tony Stark and Bruce Banner are at work on unlocking the secrets of inter-dimensional travel, wormholes, space aliens – you know, genius stuff.

Meanwhile, overseas, Iron Patriot (Don Cheadle) is fighting a one-man war against The Ten Rings, a terrorist organization using a stockpile of Stark Industries weapons to kill innocents and spread fear. The Ten Rings are lead by a mysterious warlord known as the Mandarin (Ben Kingsley) – a master of deception who sits in the shadows and threatens the American people with Al-Qaeda-like taped messages.

Sounds pretty good so far, right? Iron Patriot busts up a terrorist cell and destroys a stockpile of Stark weapons only to get captured by the Mandarin, whose special powers are glimpsed briefly. The Mandarin releases a video showing James Rhodes held hostage, the Iron Patriot suit dismantled like a cheap plastic plaything. The Mandarin reveals himself, stepping out of the shadows, with a gun pointed to Rhodey’s head. This catches Tony’s attention, who has been consumed with his work at Avengers Tower.

As for Pepper Potts (Gwyneth Paltrow) and Happy Hogan (Jon Favreau), they’re still around – but they’re not a huge part of this story. They’re back in Malibu, where Pepper is running Stark Industries. Aldrich Killian (Guy Pearce) and the Extremis storyline could still work here but, in all honesty, I just don’t care about yet another industrialist with a grudge against Tony. Let’s get back to the cool stuff, already.

The Mandarin waxes poetic on the American military-industrial complex and the Iron Patriot, who he compares to Captain America – pure propaganda. The Mandarin considers Patriot a cheap knockoff; he wants the real thing: the Avenger. He challenges Iron Man to reclaim his patriotic puppet. If Stark doesn’t show up in 24 hours, the Mandarin is going to execute Iron Patriot on national television.

To put things in perspective, the events of Iron Man 3 are happening parallel to Thor: The Dark World and Captain America: The Winter Soldier, explaining why the Avengers don’t show up. Banner stays behind at Avengers Tower to continue his research – he offers to help but Tony admits that this is his fight and he’s responsible for The Ten Rings’ rise to power and Rhodey being captured.

Tony suits up in his new Mark 42 armor. There’s a quick glimpse of his vault filled with suits and it’s hinted at that Banner may have helped him create a few for… special circumstances. Tony flies across the world using Jarvis’ navigational abilities and immediately engages the Ten Rings. If you want, throw a few Extremis super soldiers in there – or not – who cares, I’m falling asleep even thinking about plot points from Shane Black’s Iron Man 3. 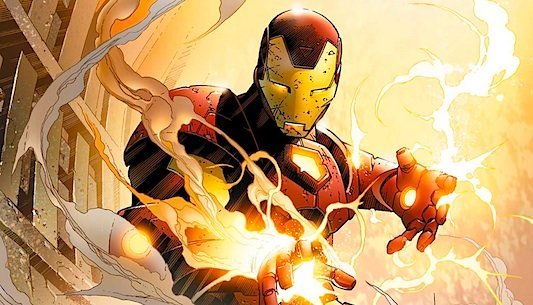 Anyway, Iron Man is doing sweet-ass Iron Man things like blowing up tanks, destroying weapons stockpiles, using a lot of crazy new gadgets to take out terrorists. Jarvis alerts Tony to a beacon coming from the Iron Patriot suit that leads Iron Man to a compound – a royal palace – where the Mandarin awaits.

Long story short, Tony’s first fight with the Mandarin doesn’t go as planned. This is the first time we really get to see the extent of the Mandarin’s mystical powers, derived from the ten magic rings he wears on his fingers. In the battle, Tony fails to save Rhodey, who is murdered at the hands of the Mandarin. Tony’s suit is blasted beyond repair and Iron Man barely makes it out of there alive.

Let’s be honest, Don Cheadle isn’t a great War Machine/Iron Patriot. Marvel isn’t going to move forward with an Iron Patriot standalone film, and I can’t really see Cheadle suiting up with the Avengers, so why not kill him and have his death actually mean something to Tony’s progression as a character. Killing Rhodes also avoids that lame third act ‘surprise’ where Tony fails to save Pepper Potts, who then reappears as Liquid Magma Super Girl and saves Tony.

Tony Stark makes it to Malibu where he’s nursed back to health by Pepper Potts and Happy Hogan. The Mandarin continues releasing tapes, touting his victory over the Iron Patriot and Tony Stark, the poster boy for capitalism. He promises one more salvo before his ‘teachings’ are complete; he’s going to finish what the Chitauri started by leveling New York City to the ground.

A determined, revenge-obsessed Tony recovers and heads to New York. He shows Banner playback from his helmet of the battle with the Mandarin and the two theorize what sort of energy source is fueling Mandarin’s awesome powers. They determine that it isn’t an arc reactor – that it doesn’t appear to be alien technology – it’s something they’ve never seen before.

Like Marvel slowly folded the cosmic realm into the Marvel Cinematic Universe with Thor, the Mandarin would herald magic and mysticism to an ever-expanding world of unique heroes and villains. By introducing Mandarin and his ten magic rings, Marvel could lay the ground work for a Dr. Strange standalone film and Thanos’ eventual quest for the Infinity Gauntlet. 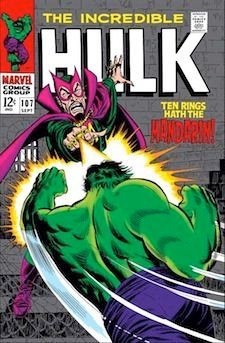 Look, I don’t have everything worked out, but I know how this theoretical movie ends. There’s a final showdown between Iron Man and the Mandarin in New York City.

Iron Man’s suit is supercharged thanks to some upgrades, but Mandarin’s mystical powers are too much for him. In crowd-pleasing fashion, Bruce Banner “suits up” as THE HULK and they tag-team the Mandarin. Instead of wasting Ruffalo screen time on a throwaway after-credits sequence, give the fans what they want and have Hulk SMASH once more!

When it looks like Mandarin is defeated, he casts a mystical spell on Hulk and takes control of the beast, aiming him like a weapon toward Iron Man.

Hulk comes after Iron Man, who takes off toward Avengers Tower. Hulk jumps and leaps through the city after him and eventually snatches him out of the air. Tony uses every gadget, but none of them can stop the big guy. Hulk throws Tony like a fastball, sending him crashing into Avengers Tower. The Mandarin continues to puppeteer the Hulk, who scales the building (bonus points for aKing Kong allusion!) to smash ol’ shell-head to bits.

Here’s the big reveal: Tony emerges from the vault in HULKBUSTER ARMOR!We got a brief glimpse at the heavy-duty suit in Shane Black’s film, but it was a complete waste of pixels after Tony arbitrarily decided to self-destruct all of his suits. In my Iron Man 3, Tony goes toe-to-toe with the Hulk and it’s a knock-down, drag-out brawl.

The fight goes through Avengers Tower, onto rooftops, and eventually back down to street level. Jarvis gives Tony an update on the Mandarin’s location and Tony attempts to push forward towards his arch-nemesis while fighting off the big green rage monster.

Hulk tries to squeeze the life out of Tony and crush the suit, but Tony delivers a crushing blow to the Hulk’s head and gets free, just long enough to get his hands on the Mandarin. In the Hulkbuster armor, Tony grabs Mandarin and crushes his hands, preventing him from using the magic rings. Hulk shakes off the spell and slowly regains self-control, transforming back into Banner.

Mandarin and his magic rings are taken into custody by S.H.I.E.L.D. Tony and Bruce exchange playful banter about the epic brawl they just had. Banner is relieved by how well the Hulkbuster suit worked, while Tony takes the opportunity to ask Banner about his wormhole, inter-dimensional research. Banner says, “Oh yeah, about that…”

After-Credits Scene: Pepper Potts is on the phone with Tony Stark, who’s flying around in the Iron Man suit. They’re making dinner plans and Tony tells Pepper to book the reservation for 7. “On second thought, better make that 7:30.” At this point, we’ve only see Tony’s face, inside the suit, talking to Pepper via the heads-up display in his helmet. The camera cuts to an exhilarating reveal of Tony in all-white DEEP SPACE ARMOR, flying through the cosmos!

Cut. Print. That’s the Iron Man 3 I wanted to see, anyway. Maybe it’s the insane ramblings of a geek, or just glorified fanboy fiction, but I feel better for getting it out of head. Now I can move on and see the rest of this summer’s cinematic offerings which, hopefully, aren’t as disappointing as Shane Black’s ‘splosion-filled spectacle.